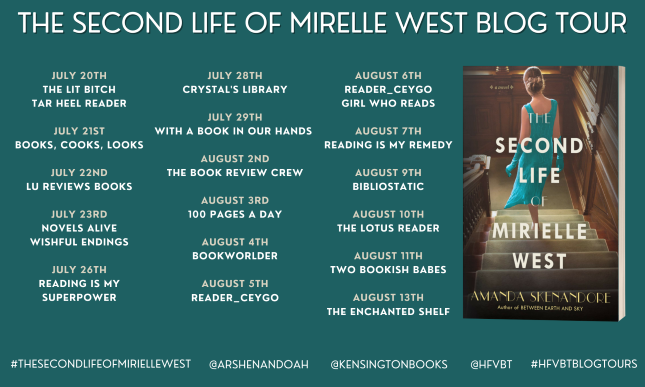 The Second Life of Mirielle West by Amanda Skenandore

r/suggestmeabook: I want to watch how a privileged, self-centered young woman deals with leprosy and all it entails in 1920s America.

From the publisher: 1920s Los Angeles: Socialite Mirielle West’s days are crowded with shopping, luncheons, and prepping for the myriad glittering parties she attends with her actor husband, Charlie. She’s been too busy to even notice the small patch of pale skin on the back of her hand. Other than an occasional over-indulgence in gin and champagne, which helps to numb the pain of recent tragedy, Mirielle is the picture of health. When Charlie insists that she goes to the doctor to have a burn checked, the consequences come fast. The diagnosis–leprosy–is devastating and unthinkable.

Enter to win a paperback copy of The Second Life of Mirielle West! The giveaway is open to US residents only and ends on August 13th. You must be 18 or older to enter.

Mirielle West feels so sorry for herself, it’s hard for the reader to, but it’s a good thing. When the horrifying ordeal is happening to someone self-centered and in so much denial that you aren’t swamped in the bleakness of life for a leper, even if it’s a little improved at United States Marine Hospital Number 66 (better known as “Carville”) when compared to most of history. Like Mirielle, I grew up reading stories of lepers in the Bible, where they rang the bell and cried, “Unclean, unclean” to warn others of their presence, and was shocked to learn in my teen years that leprosy, now referred to as Hansen’s disease, persisted to the current day.

There’s a reason that the word “leper” has come to mean an outcast or untouchable. That was exactly what happened to someone with the disease throughout the world and history (and is still the case in the few places around the world where it clusters). In the early 20th century, a patient was likely to be treated no better than a wanted criminal; lepers were unable to vote in Louisiana until 1940.

Hell, our families would be better off if we were dead.

The Second Life of Mirielle West honors the leprosarium, its inhabitants, and its staff by Amanda Skenandore’s masterful character development and sense of place. Mirielle is a fabulous character: I spent a good deal of the time wanting to slap her, but, in the end, I loved her and her complexity. It’s part of the author’s genius that you end up feeling compassion for everyone from the harsh nun who runs things at the hospital to the impossibly out-of-touch Hollywood husband.

With the stark, dreary whiteness all around them, she understood why he did it. It was an escape from the tedium of their daily lives and the horrors of the disease. It gave them something to talk about in the dressing clinic when she unbandaged and dressed their feet.

Skenandore also does a marvelous job in how she delivers the information about the disease. Anyone wanting a study in how to deliver exposition would do themselves a favor by reading this novel. I came to that conclusion when I realized how much I learned about leprosy and how patients were treated and couldn’t come up with a single time when I felt that the story was bogged down in explanations. You learn as Mirielle does, and she cannot absorb it all in one sitting (mostly because it takes her so long to accept the diagnosis and pay attention). No long paragraphs about the disease or its history—it all comes out organically and never breaks the pace.

The seemingly inconsequential details and events she left out of her letters built one upon the other to shape her life here.

The novel also examines how we deal with loss: loss of privilege, autonomy, health, loved ones, and our sense of self. It also manages to raise the question of whether we are our best selves when we are overly pampered, and although leprosy is rather an extreme remedy for privilege, the point is subtly made that a life that requires nothing of us is unhealthy as well. Which is worse, the physical leprosy, or a emotional/intellectual/spiritual one? (“Must we have one or the other?” Mirielle would have probably asked.)

There are two types of patients at Carville: those who count themselves among the dead, and those who have the pluck to claim their place among the living. The choice is yours.

Mirielle also is a case study in assumptions. She assumes so much about her fellow patients, not to mention the staff, but it all mostly adds up to a blanket assumption that no one can understand her pain, whether because they are too insensitive or boorish or because they have not suffered like her. Little by little, she begins to learn, grudgingly, that no one is immune to pain, even with a disease that numbs.

None of their names stuck in her addled mind. All she noticed was their disease. A few had islands of lesions across their skin—dry, thick patches more or less circular in shape. One had pea-sized blisters up and down her arms. Another hadn’t any eyebrows, only thickened, red skin in their place.

And then there are the wonderful touches that root the story in Louisiana. Mirielle isn’t the fan of gumbo that I am, but she takes to Southern sweet tea. I share her difficulty with understanding a thick Cajun accent, although I’d be willing to bet she’s not as mesmerized by it. Mardi Gras is celebrated at the facility with the grudging consent of the Sisters of Charity, and the descriptions of their floats made it come to life. Levees surround the grounds on three sides, holding back the mighty Mississippi, but it’s not to be missed that they are three of the four barricades keeping patients restricted to the grounds.

The Second Life of Mirielle West is not to be missed—it’s a novel that will resonate long after you finish.

One thought on ““Unclean, unclean,” they must cry”