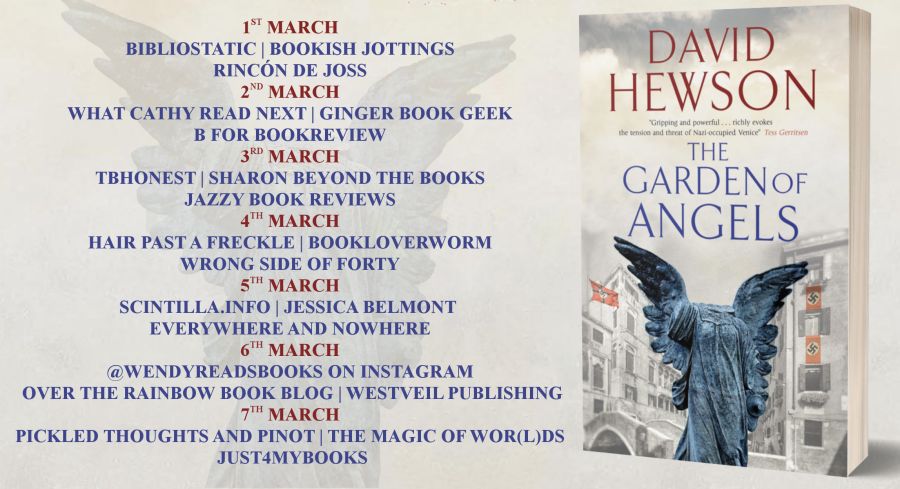 The Garden of Angels by David Hewson

r/suggestmeabook: I want to go to Nazi-occupied Venice and see it through the eyes of a young man grappling with his identity.

From the publisher: The Palazzo Colombina is home to the Uccello family: three generations of men, trapped together in the dusty palace on Venice’s Grand Canal. Awkward fifteen-year-old Nico. His distant, business-focused father. And his beloved grandfather, Paolo. Paolo is dying. But before he passes, he has secrets he’s waited his whole life to share.

David Hewson has created a taut snapshot of a few days in Nazi-occupied Venice through the eyes of a young weaver and those whose stories intersect his own. The frame story is set in Venice of 1999, but the main action is in Venice of 1943, when 18-year-old Paolo finds himself confronted with the world outside his hidden retreat set in the garden of a long-abandoned palazzo. His neighbors thought the isolation was because he was gay, a fact Paolo has mostly stayed unaware of, knowing that his family was also considered outsiders by the insular Venetians.

Imagination was a place he’d usually avoided. Particularly of late. There were corpses there, eyes open, looking at him.

Paolo must confront the basic question raised by the Nazi occupation: Does he stand aside, and hope the storm passes him, or does he act, whether to collude with the Germans to help himself out of the poverty the war has brought or to resist them? It’s a question most of the book’s non-Jewish characters ask themselves at some point. Paolo’s moment comes at the insistence of the parish priest Filippo Garzone, who believes that inaction is not a choice.

There were occasions, it seemed, when the right decision was beyond a simple man like him. To act or do nothing? Both might end in bloodshed, for guilty and innocent alike.

I haven’t been reading many WWII era books of late, but I made an exception for this one because it is set in a part of the war I know less about. The invasion of Allied troops helped split Italy in half between the southern royalist government and the northern Mussolini one, which was, effectively, a puppet of Hitler. Venice was in the northern half. This sobering book gave a lovely introduction to the people and geography of Venice. Hewson’s pride of elegant and measured, giving the story the respect it deserves.

The city on the water was spared most of this since it lived at the edge of the conflict, a precious gilded prison too beautiful for the horrors Italy was seeing elsewhere.

The framing works quite well, as Nico provides a counterpoint to his grandfather’s story. No one in the 1990s wants to talk about the war, preferring to boil it down to its barest essence, so Nico is left on his own to puzzle out how the veracity of his grandfather’s account. Not surprisingly, Nico is unnerved by the idea of his grandfather’s sexual identity being something other than completely heterosexual. The frame also helps build the tension for the main story, as Paolo insists that Nico keep it to himself, that he’s not to share it with his father.

If the fact a couple of men in extremis should get close to one another is …weird…I hate to think what you’ll make of life later on. Unless you lead a dull one.

Hewson manages to avoid creating characters of unrelenting good or evil, allowing us to see that all of them are human, making choices that are good or evil instead. The text highlights how well-meaning people can drift into a totalitarian state, which is part of the enduring fascination with the Third Reich: how do ordinary people end up committing the atrocity of the Holocaust? He also does a good job of presenting the pressures the Germans (which the Venetians call the Crucchi) put on the inhabitants of the country they occupy, and how those pressures warp people.

That was one of the lessons I think he was trying to teach me: evil wasn’t special. There was no need for extraordinary villains with scars and wicked, dark glints in their eyes. It was ordinary, mundane, a part of the city, a lurking virus within us all.

The character who best exemplifies the grays of the story is Luca Alberti, a former police officer turned liaison with the Nazis. Alberti is hard to get a grasp on, as he lies to himself as much as to anyone else. He’s somehow likable despite his alignment with the Crucchi, although the Venetians generally view him with contempt. Perhaps his motives are more than self-serving, but each reader will have to render judgment.

Dust and the remains of insects rose like a golden mist in the lamplight as he unhinged the bronze clasp on the cover and let the contents breathe for the first time in years.

The Garden of Angels is an absorbing tale, both for its imagining of wartime Venice and the themes it raises of how to deal with oppression in the present and with memories of the past.

r/suggestmeabook: I want a drama about women of various eras dealing with similar issues about work and love.

From the publisher: Present day: Emma Lovett, who has dedicated her career to breathing new life into long-neglected gardens, has just been given the opportunity of a lifetime.

1907: A talented artist with a growing reputation for her ambitious work, Venetia Smith has carved out a niche for herself as a garden designer.

1944: When land girl Beth Pedley arrives at a farm on the outskirts of the village of Highbury, all she wants is to find a place she can call home. Cook Stella Adderton, on the other hand, is desperate to leave Highbury House to pursue her own dreams. And widow Diana Symonds, the mistress of the grand house, is anxiously trying to cling to her pre-war life.

Julia Kelly expertly explores the themes of women and work in two major past periods and contemporary England through the frame of a garden. What will you give up for your dream of work or your dream of love? We used to think we could have it all, but Kelly does a good job of showing that from the dawn of professional female artists, compromises have had to be made.

With blonde hair that was beginning to streak with silver, it would have been easy to think that the woman who dressed in demure pastels and high lace collars would be compassionate. Five minutes with Cynthia, however, and anyone would have been disabused of that notion. Cynthia was made of flint and dogma.

At first, it was a little difficult to keep up with whose point of view was being discussed, despite the labeling of each chapter with each of the five women’s names.

Venetia was easy enough, given the unique name coupled with the earlier period, but I had a more trouble remembering which of the other four names matched which woman. The tone is fairly consistent for all these points of view, despite the fact that Venetia is first person and the other four are third party close.

Another theme she explores is the one of home: what constitutes one and when do we start wanting one? All of the women have different answers, and the answers morph with their character arcs, which are developed at a believable pace, as seasons change.

The choice to explore three different women during WWII is interesting. Of late, it feels like land girls and occupied country estates have been fairly thoroughly explored, but juxtaposing the land girl, the lady of the house, and the cook for the great house helps illuminate all of them in new and interesting ways.

The garden itself is lost on me. I have a vague sense of all the plants she was describing, but not the specifics of them or what a room in a garden is. However, it still worked for me, as the love of the various characters for the garden and what it symbolized to each of them came through.

A solid piece of historical fiction—probably not one to haunt my dreams, but The Last Garden in England was a good meat and potatoes read.