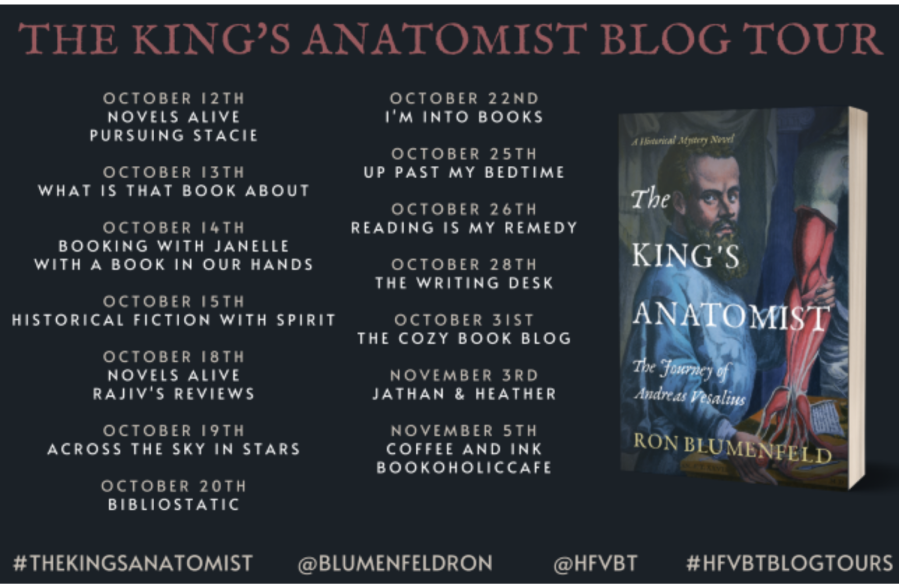 The King’s Anatomist by Ron Blumenfeld

r/suggestmeabook: I want to watch a man grapple with a life-long friendship that seems more contentious upon the friend’s death in the context of the burgeoning conflicts between the old and new.

Scientific Revolution with a touch of mystery

From the publisher: In 1565 Brussels, the reclusive mathematician Jan van den Bossche receives shattering news that his lifelong friend, the renowned and controversial anatomist Andreas Vesalius, has died on the Greek island of Zante returning from a pilgrimage to the Holy Land. Jan decides to journey to his friend’s grave to offer his last goodbye. Jan’s sentimental and arduous journey to Greece with his assistant Marcus is marked by shared memories, recalled letters, and inner dialogues with Andreas, all devices to shed light on Andreas’ development as a scientist, physician, and anatomist. But the journey also gradually uncovers a dark side of Andreas even as Jan yearns for the widow of Vesalius, Anne.

Enter to win a paperback copy of The King’s Anatomist by Ron Blumenfeld. The giveaway is open to the US only and ends on November 5th. You must be 18 or older to enter.

I’m going to start with a content warning here. The dissection scenes are very graphic and I found them too difficult to read. It wasn’t gratuitous, really, just more detail than I could deal with before starting to get nauseated. I skimmed those sections to get to the rest of the story.

There was a certain liberation, even joy, in seeing what we look like under our skins, in seeing our humanness through and through.

Consider yourself warned. Now to the heart of the story. Ron Blumenfeld illustrates the foment of the Scientific Revolution, situated as it was in the context of the Renaissance and the Reformation, and the tension between the old way of looking to authority as having all the answers, whether the authority of the bible, church, or classical writers and the evolving way of looking to demonstrable evidence as the standard of proof for truth, particularly in the sciences.

The Spanish physicians still think that Galen has taught them all they need to know and see no merit in putting their clumsy hooves inside a corpse.

In that sense, The King’s Anatomist is a great travelogue of the period, documenting landmark moments in the context of Jan trying to figure out just how his best friend’s life ended and to make sense of the relationship. The novel hits some high points and some big names in the journey to recreate Andreas Vesalius’s last year or so.

I had been living as if our friendship transcended time and mortality.

There are some very witty bits sprinkled throughout the book, which, along with a very clear writing style, makes it a coherent and well-paced read. Blumenfeld does a great job of bringing a flavor of the language of the period into the style of the book, yet manages to keep it close enough to modern to keep the prose crisp. When I went back through the book, I was surprised by the number of very quotable lines throughout the text.

Reason is a precious gift granted to mankind, but in human relations reason takes us only so far. In the end it is faith in each other—trust, if you prefer the term—and the capacity to forgive that allows love to take root and endure.

However, it has some issues as a story. First, the female protagonist, Anne, is more of a placekeeper than having any developed personality. Blumenfeld treats her in a very old-fashioned way, where she is the vague fulfillment of someone’s ideal of what love should be, but she’s not really a fully fledged character. The other major female character is Jan’s mother, whom we mostly hear about from Jan, and although he mentions the hold she had on him but Andreas helped break, that subplot is never fleshed out. So this woman, as well, is a flat cutout.

With his urging, I learned that I could safely lie to Mother because she thought it unimaginable that I would deceive her.

On the other hand, Jan is very well-developed, as is the mutual school friend of Jan and Andreas, Antoine the bishop, and Jan’s associate/servant, Marcus. Each of them feels three-dimensional, motivated, and convincing. Andreas, though, who is the titular character, comes out a bit flat, partially because of the inconsistencies and omitted explanations of the end of his life. He is clearly driven, but even by the end of the book, I still didn’t feel like I had a handle on his character, but for the fact that he dominated the relationship with Jan and was a brilliant iconoclastic rebel.

I am grateful for my life as I am living it, and unapologetic about my circumstances.

However, I never felt like the decisions Andreas made to the detriment of Jan were ever adequately explained in terms of Andreas’s motivations. Granted, Jan was hero-struck by Andreas and didn’t think critically about him until, it appears, the events that start the quest of the book, but because that was the main character arc in the story—Jan coming to a more realistic assessment of Andreas—it felt like those specific instances needed to be processed more fully by Jan so that he could accept Andreas’s flaws rather than simply fail to see them, as he had until that time, or to be stuck in an in-between place where Jan could not resolve the hero-Andreas with the kind-of-an-ass-Andreas.

If those who study nature—be they physicians, botanists, or astronomers—fail to guard against their human failings in the greater interest of truth and progress, then it will fall to others to correct the record.

The breadth of the novel, though, is a lovely overview of the foment in the intellectual world of Europe at the beginning of the Reformation. Blumenfeld folds in several cameos of well-known figures of the era, which is fun, but what he does exceptionally well is to give a very clear sense of the cultural environment of the time: the reliance on Galen and authority, the taboos associated with dissection, the Inquisition, the various bits and pieces of the early phases of the European wars of religion (particularly Huguenots vs. French Catholics), the suspicion of witchcraft, and the interaction of politics and science (nope, there’s rarely anything completely new). The King’s Anatomist does an exceptional job of creating the context into which these medical and scientific advances began.