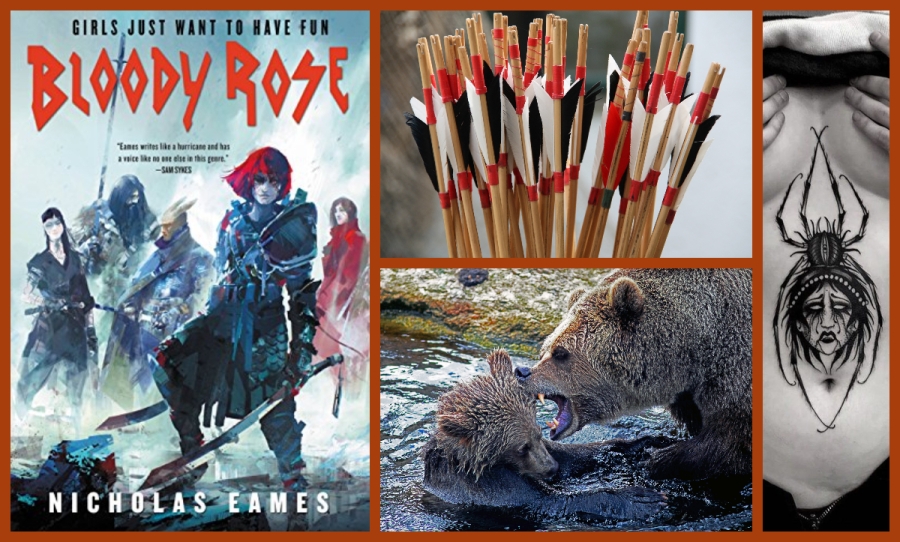 r/suggestmeabook: I want to go adventuring with a young female bard who latches on to a group with daddy issues.

From the publisher: Tam Hashford is tired of working at her local pub, slinging drinks for world-famous mercenaries and listening to the bards sing of adventure and glory in the world beyond her sleepy hometown. When the biggest mercenary band of all rolls into town, led by the infamous Bloody Rose, Tam jumps at the chance to sign on as their bard.

It’s more difficult to gauge a sequel to a book that you loved—or, for that matter, any book you approach with higher expectations than usual. I think this is a better than average book, but my initial response was to downgrade it because it wasn’t nearly as absorbing as the first in the series, Kings of the Wyld. Luckily, this is one of the few books my husband read first, and, although he agreed with the comparative rating, he supported a higher rating when comparing it to books overall.

Why the disappointment? First, the first two-thirds of the book are more serious in tone than the first book ever was. The tone of Bloody Rose isn’t as tongue-in-cheek until it gets closer to resolution, at which point the silly allusions start flying fairly thick, and even then, it still feels more grim than its predecessor. Not that grim is an issue; it’s a matter of expectations.

Funny, Tam thought, how different a thing could seem at a distance—how beautiful, despite the ugly truth. Was it worth it, she wondered, to look closer? To examine something, or someone, if doing so risked changing your perception of them forever after?

The second major difference, for me, was the protagonist point of view. Both books are written in close third. Clay Cooper, the character followed in Kings of the Wyld, is a retired mercenary who’s seen it all and done it all and really has not interest in doing it again, which is a far cry from Tam Hashford’s ingenue bard point of view. I assumed Clay would be the protagonist again (bad reader), and going back to a more conventional coming of age POV was not as interesting to me as the world weary Clay.

Shadrach had controlled them through fear, and, although fear bred subservience, it did not beget loyalty.

So both of my major gripes with the book have nothing to do with it if treated as a standalone—and it could be read as one. When I approach it from that angle, it’s quite a good book. The characters are all fully realized and distinctive, and the plot is well executed. The world building is still well done, although the difference in overall tone made the referential humor feel a little more out of place—things like the line on the cover, “Girls just want to have fun,” dropped in the middle of a battle sequence, are more likely to get an eye roll than a chortle.

“You’re a legend now, girl, and legends are like rolling stones: Once they get going, it’s best to stay out of their way.”

Let’s talk about the cast. The daddy issues of the eponymous Rose, still dealing with the problem of being a celebrity’s child and Tam, whose dad was also in the biz, just not as famous as Rose’s dad Gabe, are evident from the outset, but the majority of the rest of the band will prove to have problems with their dads as well, but I feel like going any further is spoilery enough to leave it at that.

Fuck her, Tam thought. Everyone suffers. We’ve all lost people we love, and it’s not always—or ever—fair. But only a monster paints everyone with the same bloody brush. And only a madwoman wants the world to suffer with her.

Rose’s love, the Druin Freecloud, is cool and efficient, a great match for Rose’s fire, and probably the most reserved member of the band. Brune, the shaman, takes the shape of a bear in fights, but is a teddy outside of battle. Roderick, the manager, is a fast-talking, insecure satyr, but ultimately the manager you want. Cura the ink witch is an injured soul who tries to keep everyone away but will do anything to help her bandmates. I didn’t love all of them, but I enjoyed reading about them.

Some people knew how to kill a conversation. Cura, on the other hand, could make it wish it had never been born.

The theme of “what makes a bad guy” is intriguing, and is an interesting development for this world’s history, illustrating how time can reframe your perspective. Other themes explored are the notion of what constitutes family and how to grapple with childhood trauma as a young adult. (See, I told you it was more serious than the first one.)

Glory fades. Gold slips through our fingers like water, or sand. Love is the only thing worth fighting for.

My first thought is to recommend reading Bloody Rose first, then Kings of the Wyld as a prequel, but you’d still have the problem of expectations because of the mismatch in tone. Reversing the reading order might not fix a sense of disappointment with the second book; it’s probably best to say they’re simply set in the same world.